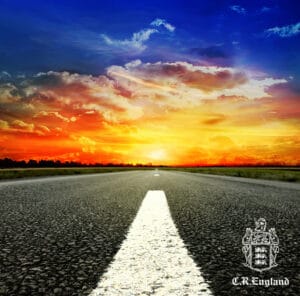 The fact is that maintaining safe speeds is part of safe trucking. There is no way around it. Furthermore, the safest truckers are those that adjust their speeds to meet current conditions. An unsafe driver does not.

Here at C.R. England, safety is one of our top priorities and we insist that our drivers maintain safe speeds at all times. Driving at a speed that is appropriate to current conditions is one of the best things drivers can do to maintain safety. This applies equally to the open road, city streets, parking lots, and truck stops.

Speed on the Open Road

The OTR trucker enjoys the ability to open the throttle and cruise on the open road. Yet maintaining safe speed is still critical – even when the weather is sunny and dry. As a general rule, we insist that tractors should never exceed 62 mph. Yes, some states allow speeds of up to 70 mph on long stretches of open highway. However, such high speeds are not good for big rigs.

We prefer 60 to 62 mph for a couple of reasons. First, it strikes a good balance between making the most of the time on the road and maintaining safe highways. When trucks stay at 62 mph or lower, they allow other traffic to move around them. This makes for a safer environment for the trucker. When it comes to on and off ramps, we recommend drivers reduce speed to half the recommended speed posted. Drivers should also prepare for ramps well in advance of reaching them, by choosing the right gear and shifting to it.

It should be obvious that speeds have to be adjusted according to weather and traffic conditions. During inclement weather, speed should be reduced to compensate for greater stopping distances and poor visibility. Where traffic congestion is concerned, truckers need to be cognizant of the tendency of car drivers to drive too fast and then slam on the brakes. They can afford to do so because of the smaller weights of their vehicles; truck drivers do not have this luxury.

Obeying posted speed limits is always important, especially when driving on city streets. The nature of city streets means drivers have to deal with stop lights and signs, tight corners, pedestrians, bicyclists, and so much more. There is simply no excuse for speeding in this kind of environment. Exceeding the speed limit is an open invitation to a serious accident that could injure or kill.

Parking lots and truck stops are dangerous places for pedestrians. These are not necessarily safe for drivers, either. C.R. England recommends truck drivers never exceed 5 mph in a parking lot or truck stop. The same is true in customer freight yards and ports. A driver should find the gear that will maintain the appropriate speed without the use of the accelerator so that he or she can use his right foot to cover the brake.

Whether you go to CDL school in Texas, California, or elsewhere, the safe speed principle prevails. The general idea of maintaining safe speeds is to never be the leader. Let car traffic move around your rig rather than you moving around them. You will find this not only makes you a safer driver but also a more conscientious driver who experiences less stress and less potential for road rage. You will probably increase your fuel efficiency as well.

Founded in 1920, C.R. England, Inc. is headquartered in Salt Lake City, UT, and is one of North America’s largest Dedicated transportation companies. C.R. England services include National, Mexico, and Intermodal.

C.R. England has also been regularly recognized for management excellence, including the 2020 Glassdoor Top Places to Work, the Achievers 50 Most Engaged Workplaces™ Award as well as a 2021 US Best Managed Company by Deloitte Private and The Wall Street Journal. For more information visit www.crengland.com.